Theatre Suburbia
The 54th season of Northwest Houston’s longest running all volunteer playhouse
Presents the Houston Premiere
Play by Jessie Jones, Nicolas Hope & Jamie Wooten
September 12 – October 11, 2014
Directed by Judith Mallernee assisted by Susan O’Connor
Web site: http://www.theatresuburbia.org/
Email Address: info@theatresuburbia.org
Address: 4106 Way Out West Dr, Suite N, Houston, TX 77092
Phone Number: 713.682.3525
How many weddings were you involved with as an usher, bridesmaid, and cake cutter? Six women + wedding =? Sounds much more fun that other shows with weddings and funerals, yes? Just having celebrated our 30th, what’s in store?
Director Judiith has been an officer and director of this fine venue for seven years. With a legal secretary background, she brings a wealth of real life experiences as she directs these zany characters. View the cast and crew, www.theatresuburbia.org/show.php?show=391&tab=bios
Off Hempstead Highway, a bit tricky to locate the street in the dark, so keep your GPS on or your navigator’s eye’s looking. After you park free along the side, you walk in to a welcoming member of the VOLUNTEER cast; remember all those you see ‘working’ are there for the love the stage and their friendships made. There’s room for you to volunteer in many ways, including set construction, stage managing, lights, sound, ushers and hospitality.
To your left you can subscribe for the entire season (a great buy), donate to their campaign (all fine arts groups need money) and visit the ticket office for your evening’s seats for fun! Donations are accepted for soft drinks, water and wine, and the yummy crackers on the other side of the lobby are free!
As you walk towards the theater, the stage is set with a lovely wedding cake and guest book, putting you in the happy mood of attending a wedding. Now, you never really leave the dressing room for the bridal party, yet you feel like you’ve attended a number of weddings by the end of the show.
Megan evolves her character Kari beautifully, the first cast member to meet who is our guide as we travel seven years with these long time friends. How many 30 year friends to you have? My husband and I were just thinking of our own wedding party and where they were, 30 years later.
Actress Phyl Deany is everyone’s ‘mother’ friend Libby, who fixes everything, looks so put together and charming while smiling through her tears for her personal‘failings’. Her character is the rock that helps her friends through the roller coaster emotions and situations of these 7 years.
Enter Sedalia, played by Peggy Butler, owner of the lovely historic Laurelton Oaks venue in Richmond. Remember the wedding organizers you’ve met over the years? Her wonderful fly in the ointment helps the girls over some of the hurdles involved in the upcoming nuptials.
Who is your beauty queen friend? Bring her with you and meet Monette Gentry, played by Suzanne King, after the show! This egocentric character is one you’ll love while appreciating her long time friends!
Charlie Collins, Vicky McCormick, brings a totally different flavor to the acting palate of girlfriends, keeping the interest high in what’s going to happen next?
To complete the square of friendships, Stacy Spaeth, played by Deedra Wingate, brings the logical, shoot from the hip, honesty is the best policy attitude to round out the variety of personalities that kept four girls friends into womanhood.
A board committee of TS meets and selects the works for the year. These writers come with large resumes, many plays and many productions, check them out the web site.
Comedy is a challenge to perform — timing and inflection. These actors crafted an evening of entertainment using a script that was a wee bit lethargic. People’s memories of their friendships and wedding experiences were the additional ‘actors’ that enhanced (or detracted) from the action on stage. Laughter and tears reigned throughout the audience as many experiences brought back emotions or as a reaction to the emotions on stage.
Wedding planners, wedding parties, anniversary groups and friends should drop by and enjoy the show. From the program: Reasons why The English Language Is Hard to Learn (author unknown)
1 –The bandage was wound around the wound.
TS’s next production is Dear Santa by rob Frankel, 10/31 – 11/20, directed by Elvin Moriarty.

BAD MEDICINE OR GOOD TO THE LAST DROP

Do you enjoy westerns? Happy endings? Interactive theatre? Science/chemistry? Shades of Shakespeare, maybe Gilbert and Sullivan? As they complete their 53rd season, Theatre Suburbia (TS) invites you to practice your boos, hisses, cheers and ahhs to support the villains, heroine and hero in the summer ‘meller drammer.’ Bring a limbered up arm to gently toss popcorn at the villains when they come your way.

Theatre Suburbia’s first summer ‘Meller Drammer’ in August 1969 was “Perils on the Pecos, or Gun Fight at Gory Gulch”, an unpublished script by then Houstonian Bill Davis. Today audience members are ‘kids’ whose parents brought them a generation ago, bringing their friends and families!

What is a melodrama? Remember Popeye, the sailor man cartoons? Hero, heroine and villain.
“In general, melodramas show a very basic view of the world, breaking things down into the fundamental categories of “good” and “evil.” There is almost always a hero, who fights for what is right, and a villain, who tries to defeat the hero for his own maniacal purposes. A heroine usually holds the affection of both the hero and villain, and she typically needs to be saved in one way or another over the course of the plot — she is the damsel in distress.”
From: http://www.wisegeek.com/what-is-melodrama.htm

TS brings this art form that began in the 18th century to modern Houston. “Bad Medicine’s” talented cast excels as they perform the tight, progressive plot written by local playwright Kris Thompson. Thompson has a lifelong love affair with writing, with the audience as the beneficiary. Key to driving the action on stage with her repertoire of melodies is gifted pianist Alice Smith.
See more about the history at http://en.wikipedia.org/wiki/Melodrama

Then the lights dim and we emerge in the 1800’s (program need ‘‘s’) Bagwell, CO (in honor of a former Astro?), at a timeless set of a quiet cattle town’s saloon. The scene titles support the focus and drive: Near about noon, Just a bit later, The Next Minute and Following right after. From the outset, this engaging story keeps you laughing, booing and ahhing while on the edge of your seat!

The characters’ costumes flowed or jingled, matching their role. The dialogue’s balance among the cast and ongoing humor kept all four corners of the theatre interested. Blocking for a theater in the round production takes effort and flexibility. This cast has the idea, and with attention to standing and sitting angles, can reach even more audience members.

With the constant musical background, voice projection and meter (not too fast boys) are so important so everyone can hear the catchy phrases! Saloon owner “Lacey” was the epitome of projection.

The melodrama is a true reflection of the organization’s mission to bring a wide variety of quality theatre to Houstonians at the lowest possible price. This happens while encouraging emerging talent both on and off stage, often producing works by local playwrights. AND they are all VOLUNTEERS! Great energy, dedication, service and talent from the myriad of volunteers who stage managed, designed, did tech, offered audition support and coordinated printing, publicity, web, prompt, props, photos, costumes, and set construction and hospitality and usher staff. It’s inspiring to see the supportive community who offer in kind gifts and monetary donations from patrons, advertisers and donors.

Will true love triumph? Find out as you join the cast and crew who are ready for you! Visit them this summer and be part of their 54th season, beginning with “Always a Bridesmaid”. Auditions are July 20 & 21, and the play runs September 12 – October 11. 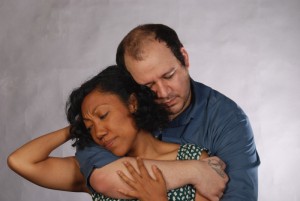 May 30, 2014 — There was community in the air of this community theatre. The after-opening-night-party-feast smelled wonderful. What wasn’t stereotypical for community theater was the onstage door that didn’t move the rest of the scenery when slammed hard. The lights were hung well. The jukebox, glowing in dim light was a wonderful touch. Man, what a wonderful thing to have that many people giving of their time and talents to create art live on stage, to heighten the moment, to make theater.

I don’t know why, with the lead actress right there on stage, one would twice decide to play an almost entirely inaudible recording instead of letting the actress say it somehow and be heard and understood. If I were to sum up the acting as a whole, I might try to wrap it in a single comment: that the lead actor, husband onstage to the lead actress, touched her with no sense of the intimacy and knowledge of her that a husband would have. I started to fall in love with the two middle-aged nymphs in black who moved props around in dim light between scenes. They were on stage so much that I considered them a part of the play. There are certain acting coaches who say that one can make the scene more real by touching the set and the props, imbuing them with reality and meaning. Maybe the actors would be more comfortable on stage if they were doing some of the things around the diner that the props nymphs did in the darkness between scenes. If you change the writing on your ‘specials’ sign, doesn’t that make it and you more comfortably ‘there’? If they could move or clean ketchup and sugar holders instead of taking up so much time in the dark to move props around the stage, maybe the first act would move more smoothly and the blackouts could last seconds instead of minutes. Maybe I was supposed to enjoy the nymphs in the dark and lost some pixie meanings in the script. There was a sense, when watching the action of the play, that maybe I was seeing melodrama, easy evil, innocence stolen, good guy loses…….or was there any good one?

It’s rare that I feel comfortable talking about how the play is written but this one makes me object to the philosophy I see, which seems to say to me that success opens one up to evil curses, that one can relatively innocently accept a gift, backwardly be committed to a deal and be crushed by demons because….I don’t know, because demons do that? That the plot, once started, is inevitable, like a written play from which there is no escape, also bothered me. Why didn’t they leave? Was greed implied but not evidenced? I might have been dragged into the story more if I wasn’t sure that the guy was a demon, that demonic statements he makes early in the play are innocent remarks, that his likeability makes it impossible to believe that he really IS a guy with a dark hat.

I was happy to see the lead actress, Callina Situka as Cassie working. I’d go back to watch her again.

You want to feel at home with a theatrical family that has been there doing theater for almost a half a century, go to Theatre Suburbia.