October 30, 2014 – SRO let the band be so loud, relative to the singers,that I left after the show with a head-ache and I like loud music. They had so many wireless mikes to control and the band was in a box that reflected the sound strangely and it really didn’t work for me. I’m not sure about the frantic movement from spot to spot by the actors in the beginning. Seth Cunningham pulled out some performance abilities to attempt to make things better. Liz Tinder was impressive in her commitment to her roles. Uncle Ernie was believable. 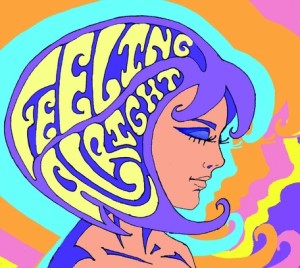 FUN and Feeling Alright at Obsidian Art Space
THIS is immersion theater, maybe in its simplest, purest form. The audience is told that it can sit back in their seats or get up and mingle or dance as they please during the show. The front row has seated people who want to be asked into the scene at various points, but the show is blocked as a reunion where the audience can decide to participate or not at any time. No coercion, just the opportunity to get on stage during a musical and feel comfortable and a part of the show. The show would probably live best if 20 or more audience members were up and dancing from the middle of the beginning of the first act onward. This Feelin Alright show is FUN! Please don’t interpret this paragraph to mean that any audience member is going to be embarrassed. What I thought was essential and great about the show is that the cast is well equipped and prepared to mix with the audience members who want to have fun without losing control or losing the plot of the play. Simple but difficult to achieve: friendly comeliness without intimidation. Fun, fun, fun.

The band represented the seventies and sixties music for dancing at a reunion very well. The sound levels were comfortable. The bass player, Matt Wilhelm, looked the part perfectly in his round sunglasses and paisley suit and put down the bottom nicely. The guitar player next to him James Hyatt was an absolute movie star. The show would have been a lot less fun if those two weren’t upstage for the whole show to watch. The drumming of Sean Ramos was tight and the piano work by Josh Artall was quite chronologically correct. The sound was good and pleasant and fun.

I had to realize that the singers were a band at the reunion, interpreting the songs in their own ways before I could settle in to enjoy the fun. Feelin Alright is a complex song, interpreted in this case, as I saw it, as an attempt to get the audience feelin alright. Jeff Taylor as Johnny had some gags that worked very well throughout the play. Heather Hall sang an angry Janis Joplin song. Once I realized that her anger was a part of the envelope which contains the delivery of her character, I was fine with how well her voice sounded and the way she interpreted the song. The energy of the show was really kicked off by right in the beginning by Marco Camacho as Matt . I’m not sure his low key camping was completely chronologically correct, but it worked and it was he that I found myself watching during much of the beginning. Heather as the inamorata character was interesting and nuanced. Robin Van Zandt as Stacy pumped a hot pants sexuality that was necessary for the show, if a little aggressive. Her Aretha Franklin solo number was anachronistic in her aggressive approach. I’m not sure those attitude moves or expression cliché’s were invented yet. I might expect some more movement research from such an accomplished performer. Pumping sexuality is not easy, even in hot pants and what a fabulous singing voice. Looking at the program, I find myself wondering if it was Aretha or Son of a Preacher Man where I saw the hip hop gestures. I understand there were some problems with Chelsea’s voice tonight, so maybe the program was changed until she healed. J.D. Rose’s singing voice was very pleasing and his character was played well. They all were double if not triple threat performers and VERY accomplished. The costume choice for Chelsea Lerner as Peggy,is in my opinion, the one which makes the most sense. I didn’t have to ask myself why she was dressed that way. She exhibited, not only a wonderful voice, adequate dancing, believable acting, but also that quality necessary for immersion theater, watchfulness. She saw the crowd as both audience and players and watched for interaction and instant blocking and forward motion of the plot. They all seemed very well prepared to reshape the show as audience participation demanded. To me this was more impressive even than the great harmonies and singing and playing and acting and dancing.

Speaking of harmony the girls on Chain of Fools or River Deep were doing monster good work on the harmonies.

I recommend to the Houston audience to go to dance and enjoy the fun of this simple little show. Familiar music played well to dance to or listen to and a story to watch or be a part of. You won’t feel like a dangling participle at this show. Wear reunion wear or any comfortable clothing. Wear your old prom dress or your blue jeans and go to the show…. for fun.